On the wild goose chase

Earlier this month, Facebook reminded me that it was “6 years ago today” that I got my tattoo. 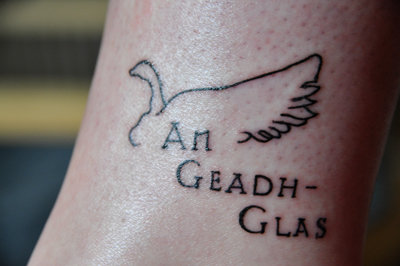 I’d had an eventful couple of years before that.
I moved out of my parents house and moved countries.
I started (and dropped out of) university.
I travelled the globe.
I discovered things that made me come alive.
I found things that killed my joy.

I had no idea what the wild goose chase really meant. I still don’t.

It is the greatest adventure, even in the darkness and the doubt.

June was a fairly good month of reading for me; there were a few gems mixed in with the cheesy, switch-off lit.

is well worth a read – perhaps particularly for parents, but I found it helpful as an ‘adoptive aunty’. I love the focus on learning how to do life online together, and not focusing on the false notion of ‘digital natives’.

A few ‘stop and think’ lines from last month:

Jesus turned “others” into “anothers.”

People don’t really want to be cured. What they want is relief; a cure is painful.

So, don’t just think that some time in the future when you’re older or wiser or can control your temper or you live somewhere else or you’re not single or you’re a better person, you’ll serve God or do what He wants. He wants all of you now, how you are.

Letting go is not giving up and admitting defeat; it’s choosing to move away from a thing that is actually defeating you already.

Real criticism begins in the capacity to grieve because that is the most visceral announcement that things are not right.