Place Your Hands Against The Wounds

Two years ago, I took some faltering steps towards the dream I hold closest to my heart:

photographs that change the world.

On a warm summers day 3 years ago, my friend Suse opened a door for me, which resulted in a summer spent documenting the work of Fields of Life in East Africa.

I spent almost two months based out of Kampala, working alongside short-term visiting teams and local staff, witnessing the joys and frustrations of Ugandan life. Falling in love with both the country and the people. 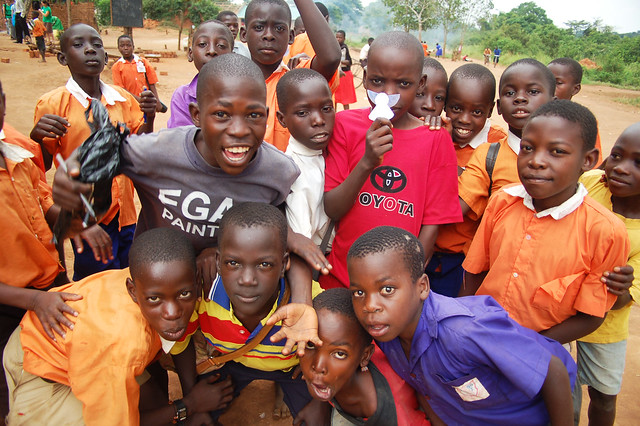 One of those locations was Ethiopian Village Restaurant, a mere stones-throw from the FOL office.

That was my area. That is my area.

A lump forms in my throat as I remember walking past the restaurant and across the street to buy ice cream on lazy afternoons off, or get a boda boda into Bancafe.

Mercifully, the FOL staff are all safe. But my dear friends at Invisible Children lost one of their staff. Nate “Oteka” Henn had been working for IC for 18 months, and while I did not know him personally, several friends did. Nate fought for his Ugandan friends, for their stories, for hope for them, for the possibility of peace. His life inspired me even though we never met. 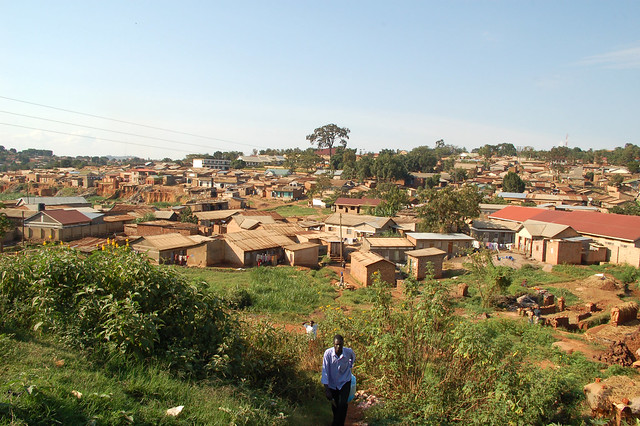 My mind wanders back so frequently to memories of that summer spent living my dream, and seeing it have an impact. It seems so far away now, and yet we wake each day with the opportunity to place our hands against the wounds of a broken world, to try to stop the bleeding. For our Ugandan friends it is a very literal bleeding this week. Perhaps for us the wounds are more hidden, our bleeding more internal.

May you place your hands over a wound this week and join so many others as we seek to make our lives a gift to those around us.

A stumbling, stuttering, sometimes-failing gift, but a gift nonethless.

Tomorrow We Will Be Killed With Our Families

I’ve had Philip Gourevitch’s book, We Wish To Inform You That Tomorrow We Will Be Killed With Our Families, sitting on my bookshelf for quite a while now, but it is only recently that I started to read it. I have spent most of today finishing it off, and I think it has fast become one of the top two books I’d recommend to anyone wanting to read about Rwanda.

Gourevitch’s book is essentially a collection of stories from Rwanda, focused around the genocide in 1994. It’s heartbreaking reading, but insightful, and well written. This time last year I was still in Rwanda. No doubt you would have found me meandering down the beach at Gisenyi or holed up in a cafe in Kigali. Though my time there was short, I think about it often. I think about what it must have been like to live through a genocide, and maybe worse, to live through a genocide that everyone knew about but noone cared about. I wondered what it must be like to live in the aftermath of such an event, and it was often something that came up in my conversations with Rwandan friends.

Gourevitch writes of the many NGOs and governments who sought for neutrality in the situation. It provoked such a strong reaction in me… I wonder, can we really claim neutrality if our inaction is what is aiding the violence? Just thinking aloud, but it’s a thought that has been plaguing me in recent days.

Reminds me of that old quote, usually attributed to Edmund Burke, “all that is necessary for the triumph of evil is that good men do nothing.”

Friday was my last day as a Christian Aid gapper… and I’m a little sad to see it come to an end.

It has been a whirlwind of a year, and feels like only yesterday I was sat on the roof of the office in London, starting to get to know some of these other gappers I’d be working alongside. I remember Adam with the pegs on his nose. I remember Anita wearing a flag as a cape. I remember Granda Gapper Robert’s enthusiasm.

Then there was the DRC. Two weeks was nowhere near long enough, but what a glimpse we got of the country. A land of great contrast. Of potential. Generous people who welcomed us with open arms. Stunning scenery. Inspiring partners. And Congo wasn’t just about the partners… it was about the gappers. Sitting under the stars talking until late. The game show to end all game shows. Enjoying a beer over a game of Mafia.

Friendships to last a lifetime.

A year ago today, I stepped foot onto African soil for the first time. I arrived in Uganda early morning, and I still remember it as if it was yesterday. As we flew in to land in Entebbe, I remember the lush green trees and the brooding clouds. I remember the heat and stickyness as soon as I stepped off the plane. I remember getting into the terminal, waiting for customs, when the heavens opened and there was a torrential downpour. Ten minutes later it was as clear as could be again. 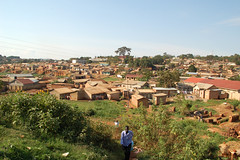 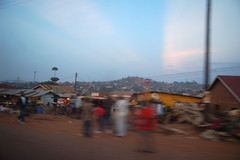 Their chant echoes in the corridors of power and under the tree-leaves in the park just the same: Rescue Me. AK47s and teddy bears on their tees, a strange juxtaposition designed to stir us into action. 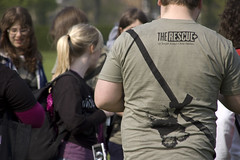 This is the RESCUE. For over 23 years, Joseph Kony’s Lord’s Resistance Army and the Government of Uganda have been engaged in the longest running war in Africa. That war is no longer contained within the Ugandan border, but spilling over into neighbouring Sudan and DR Congo. Though there have been stuttering attempts at peace talks – more stops than starts, lets be honest – the violence continues. After the last failed peace talks in March 2008, Kony’s forces regained strength. On Christmas Day 2008, 620 people were massacred by the LRA in eastern DR Congo, and 160 children abducted.

Every day that it continues, more children lose their childhoods; abducted and forced into child soldiering. The world knows them as a rebel army, but in truth they’re just kids. 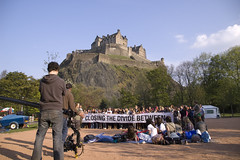 Edinburgh seems a long way from northern Uganda, but on Saturday it’s streets were filled with hundreds of activists, young and old alike, to raise awareness of this war. 100 cities in 10 countries around the world joined together to symbolically abduct themselves to free the abducted child soldiers. Our march took us from the Scottish Parliament at Holyrood, along the Royal Mile, finally reaching our destination: a mock-LRA camp set up in Princes Street Gardens. Our abduction would see us spend the night sleeping out; waiting for a celebrity to arrive and rescue us. 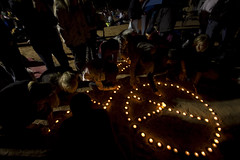 As the music got going, all across the camp people were writing letters to our political leaders, asking them to bring an end to this war. Alongside the painting & photo projects already planned, spontaneous acts of creativity occurred as people responded to the stories. One group of over 50 pupils from Carnoustie High School spelt out the name of their town and a tri-peace symbol using tealights… a mammoth undertaking! Despite not having official backing for it to be a school trip, the senior pupils went ahead in organizing it all themselves. They described their motivation as ‘young people standing for young people’, that as a generation we have the buzz to carry this forward.

We didn’t have to wait long for our rescue: Billy Boyd, better known by many as Pippin from Lord of the Rings, came along to lend his support. 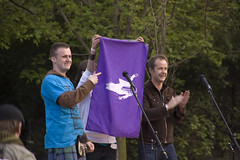 “The reason that we’re all here is because we’re all human beings, and we see an injustice, a wrong, and as human beings we want to see that made right. It doesn’t really matter what country it’s happening in, or what race you are, or religion; it’s more than that. It’s about being human. We’re all equal and we all deserve the same rights; the right to a childhood and the right for freedom.”

Couldn’t have said it better myself, Billy…

[From an article I wrote for Ctrl.Alt.Shift]

Billy Boyd Comes To The RESCUE

BIlly Boyd came to our RESCUE on Saturday on behalf of the child soldiers in northern Uganda. Here’s a little video of him inspiring us to keep going…