In my ‘office’ this afternoon… can’t believe I only discovered this place recently!!

“We are angry with the people who are doing this. We have made no contribution, but suffer the highest impact… the global nation states must take action. If not, we’ll be calling it climatic genocide.”

Last night I went to this meeting. Ricardo Navarro from El Salvador gave his perspective on how climate change is affecting poor communities around the world. I liked that it took a development slant more than an environmental slant on it.

We were addressed by a man from the Transport & General workers union, then by Kirstie Shirra who works for WDM, and finally by Ricardo Navarro, before the floor was opened for questions.

– CO2 emission is the result of consumption, which is the result of production.
– The solution is relatively simple – reducing emissions reduces climate change. But the CO2 already in the atmosphere has an inertia – it will continue to affect us for 50-100 years, even if we completely stop emissions now.

– Trade means more consumption/production. Governments are pushing for free-trade agreements, but they are pushed by big corporations.
– Trade as such isn’t bad – but it is promoted at the expense of social and environmental concerns.
– Countries are made poor through a process. The process of impoverishment and enrichment are the same side of a coin – for example, you can’t look at the wealth of Shell without looking at the poverty of Nigeria.

– The most effective weapon of mass destruction is poverty – it kills the equivalent of one Hiroshima bomb every 2 days.

– We have to be conscious about the problem – that means looking at the whole process.
– We have to be committed – it’s a 24/7 thing.
– We need to convince others – discuss what to do in your local context.
– We have to stop it by acting at every level – economic, social, religious, etc. 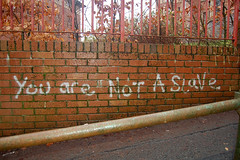 It is for freedom that Christ has set us free.
Stand firm, then, and do not let yourselves be burdened again by a yoke of slavery.

“Riskless warfare in pursuit of human rights is a moral contradiction. The concept of human rights assumes that all human life is of equal value. Risk-free warfare presumes that our lives matter more than those we are intervening to save.”

I’m still reading Shake Hands With The Devil… haven’t had a lot of time to read lately as I’ve been so busy, plus this is a fairly heavy book to read… heartbreaking is more the word maybe. I was reading a passage from it this morning, when I came across these words, which cut me to the bone…

“As to the value of the 800,000 lives in the balance books of Washington, during those last weeks we received a shocking call from an American staffer, whose name I have long forgotten. He was engaged in some sort of planning exercise and wanted to know how many Rwandans had died, how many were refugees, and how many were internally displaced. He told me that his estimates indicated that it would take the deaths of 85,000 Rwandans to justify the risking of the life of one American soldier.“

I don’t even know what to say in response to that. I’m not American, and I don’t want to pick on America, because the UK and other developed nations were no better… but what???! Why should an American (or British or Irish or whatever) life be worth more than an African life? We have a lot to answer for. I have a lot to answer for. In what ways do we still perpetuate this idea that African lives are worth less than ours? How do we overcome it?