Rather than lyrics, I though I’d highlight a few bands I got to hear at Greenbelt over the weekend. 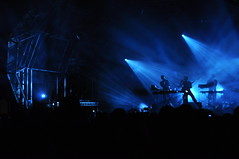 Röyksopp: Played on the main stage, and I loved it… high energy, lots of fun. I’ve definitely been getting into electronica a bit more lately! I enjoyed the woman dressed as an owl… purely for entertainments sake… and the lighting for the show was great. So maybe I enjoyed it for the visuals as much as the music…!

The Invisible: I’d never heard of these guys before, but their debut album has been nominated for a Mercury prize.

Foy Vance: It’s always a pleasure to see Foy play, and even more so to have him be the last thing I see at Greenbelt.

Agents of Future: These guys lead worship at the service on Sunday morning. I’ve gotta be honest and say that I don’t think it worked – I love the music and loved the arrangements, but it wasn’t ideal for leading communal musical worship, pretty hard to sing along to. BUT I would really love to hear more of their stuff, so check them out.

Duke Special: Greenbelt was the first time I’ve actually seen Duke play live, and despite missing the start of it (while I was off at another session) I really enjoyed what I did see.

There you have it… musical recommendations from Greenbelt. What’s been the soundtrack of your week? Anyone see any other great music at Greenbelt?